Very special icon painted by the great artist from Palekh, Olga SUBBOTINA
Her work is always of great finesse, take look at the background painted with the golden leaf technique, how magnificent!
11 cm high by 9 cm 5 (4,3 x 3,5 inches high)
This icon’s story is linked to the monk’s life Arseny Konevsky. Desiring to live in the high places of the monastic world, he traveled to the Athos mountain.
Three years went by and Arseny decided it was time to go back to Russia in 1393, in his hometown of Novgorod. Then he moved to the island of Konevsky,
where he built a church. Soon after the church was done, along with the benediction from the archbishop of Novgorod, he started looking for a place
to establish the futur monastery above the Volkhov river, to the Ladoga lake, or as we used to call it back in the days, Nebo lake.
After going through many islands, the ascetic finally set foot on the island known by the name of Konevets.
Here, the monk Arseny erected a holy cross, built himself a shed, and, shortly after, built up a church honoring Nativity and the Virgin Marie.
The asceticism life of Arseny inspired and gathered those who wanted to be like him and soon enough, a monastery was born on the island, called Konevsky.

The miraculous image of Konovsky represents Virgin Marie along with the Holy Child holding two chicks (sometime just one) in his hand.
Today, the icon can be found in the orthodox monastery of Valaam in Finland.
We celebrate it on July the 23rd ( July the 10th in ancient time schedule) 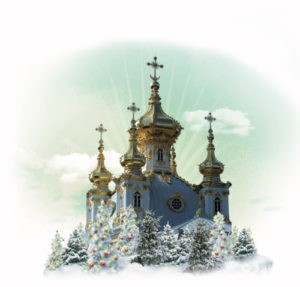